True Mirror Company was formed in 1992 by founder, John Walter, who first independently discovered 10 years earlier that a true image reflection was possible by putting two mirrors together at right angles. It wasn’t a new idea, actually patented in 1887, but no one ever saw it as more than a physical curiosity.

However, what he discovered was “himself”, something that he recognized as his true feeling, which at the time was pretty happy. The key was the light in his eyes when he was smiling. For the first time, it looked natural and could smile back easily. Not so in the backwards mirror where his smile (like most people’s) felt fake and strained and would fade within seconds.

He found that using front surface mirrors could remove the seam between the mirrors, and he knew that he could make a real thing with it. That seam is critical, it goes right through your eyes, which with regular mirrors, makes it very difficult to make real eye contact with yourself. With the front surface mirrors, and many, many trial and errors, he now can produce an optically perfect, seamless true image mirror.

The company is small now, but with big visions…it simply is a no-brainer that the most wonderful thing about you, your authentic self, is what should be looking back at you in your reflection. Mirrors just cant to it – within seconds we fade to a mirror version of ourselves and lose all of our personality, expressions and traits that others see and know about us. It’s still a huge unanswered question about what this society-wide distortion of self-communication has done to us…but it can’t be very healthy.

It will take a lot of time for widespread adoption, but eventually, the comparison to the artificial version in backwards mirrors will become obvious. And at some point, literally every single person in the world will probably find out that such a thing is possible and will have some curiosity about what they look like in it.

Small company, big visions. Investors are encouraged to find out more – there’s a very bright future in store for those who carry this concept to full fruition.

For now, we are filling orders to places all over the world, and wowing people in person whenever possible.
We are currently backlogged about 3 weeks for shipping True Mirrors, thank you for your patience.
For more information about the True Mirror, please see our FAQ page and contact us at info@truemirror.com if you have any questions.
Thanks!
John Walter
Founder 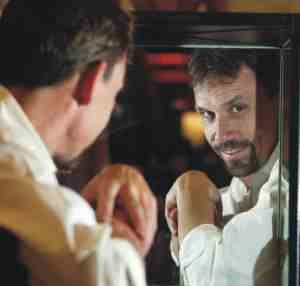